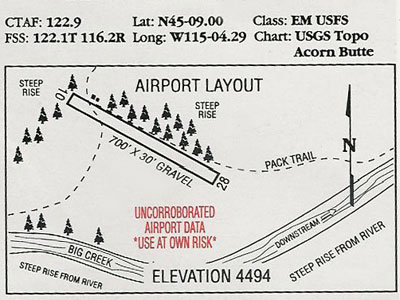 This strip is rated as the second most difficult strip in "Fly Idaho". As it turned out I was a little more concerned about Dewey Moore than the greater difficulty-rated Mile Hi. A winding approach in the bottom of a canyon was required with a right turn to a touch down spot that would not be visible until just before the flare. The take off would require some maneuvering right after lift off to follow the canyon out. The go around potential did not look good with rapidly rising terrain surrounding the strip. The flight in and out went well with no problems. The landing used about 250 feet and the first third of the strip was all that was required for take off. I was carrying about 60 gallons of fuel and the airplane was full of camp gear. I flew in and out of Dewey Moore three times in two days. After having gained some familiarity with the strip I also wanted to do a go around. On a short final I made a left turn into the rising terrain and was able to reverse course to fly back out.

Approach End - Dewey Moore is 700 feet of gravel, rock and dirt. I could have safely used this strip if it were half the length. Only experienced back country pilots need apply for this one.

Departure End - Simply getting off the ground is not enough. With the side of a mountain at the departure end of the strip, you have very little room to build speed. The King Katmai was off the ground in about a third of the length of the strip and I had lots of flying time before I ever got to the end of the strip. This equates to speed, rate of climb and most importantly SAFETY. Be careful. The blinding early morning sun is going to be right in your eyes when you are turning into the canyon. Always wear a cap.

On The Ground - What a beautiful and quiet spot to take a break. Anyone up for camping, hiking, fishing or exploring?

A Bear in the wilderness. Give us a call and we’ll build one for you!